Thinking outside the cage

Thinking outside the cage

Thinking outside the cage from KAUST Discovery on Vimeo.

Molecular cages, in which guest molecules cling to the cages’ outer surfaces rather than enter an internal cavity, could cut the environmental impact of separating mixtures of industrial chemicals, research from KAUST suggests.

Molecular separations performed at scale by the chemical industry collectively account for as much as 15 percent of global energy consumption. One of the most energy-intensive separations involves benzene derivatives, called xylenes, which are produced as a mixture of three isomeric forms that must be separated for their various industrial uses. The most valuable isomer, para-xylene, is a key ingredient in polyester and polyethylene terephthalate (PET) polymer manufacture.

“Conventionally, these isomers are separated by energy-demanding methods, such as fractional crystallization,” says Basem Moosa, a research scientist in Niveen Khashab’s lab. “Alternative techniques that require less heat would lower the carbon footprint and overall pollution of xylene separation,” he adds. 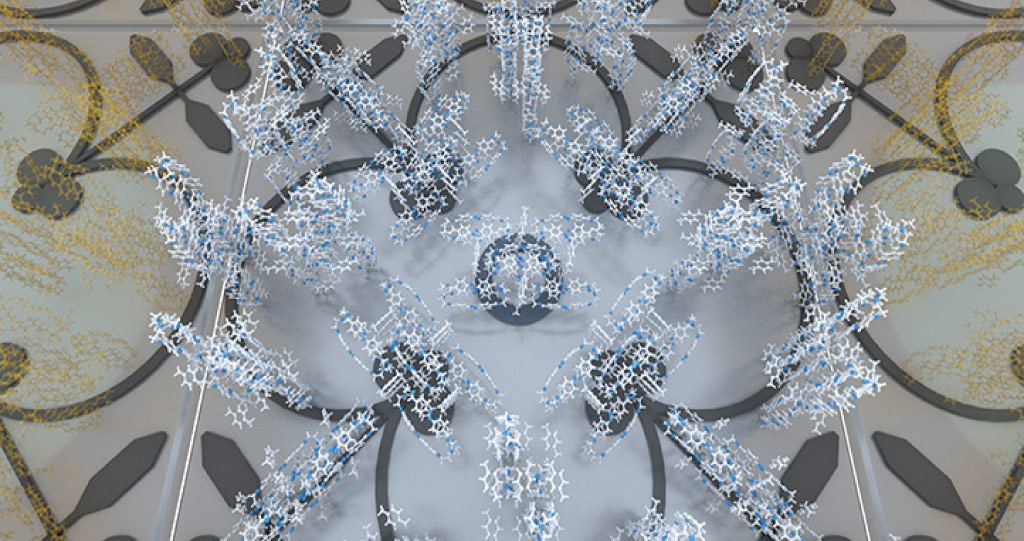 These molecular cage-like structures are cheap to scale up and can be easily tuned for selective separations.
© 2020 KAUST; Heno Huang
Khashab and her team have been investigating the possibility of separating xylene isomers using cage-like materials, which selectively absorb one xylene isomer in the mixture, as an energy-efficient alternative separation technique. Previous research has focused on porous inorganic materials called zeolites, but processing challenges and zeolites’ limited selectivity have somewhat restricted their adoption by industry.
In their latest work, KAUST researchers turned to stable, easily made organic cage materials that incorporated nitrogen-based azo groups in their structure. The materials captured the para-xylene isomer with high selectively. “Compared with other organic materials, it showed one of the highest adsorbents for xylene separations,” says Aliyah Fakim, a Ph.D. student in Khashab’s team. Strikingly, however, the para-xylene adsorption did not involve the isomer entering the azo-cage. Instead, the isomer stuck to the outside of the cage, forming crystals in which each para-xylene molecule was surrounded by four cage molecules.

Microscope images of the crystals formed by isomers sticking to the surfaces of the molecular cages designed by KAUST scientists.
© 2020 KAUST; Anastasia Serin
The team plans to refine the performance of the nonporous organic cages by lowering the activation temperature and reducing the time it takes to absorb and then release the para-xylene once extracted from the mixture.
However, the concept of separation using nonporous organic cages could be adopted for many industrial-scale chemical separations, lowering the energy demand of these major industrial processes, Khashab notes. “We believe that these structures will be a next-generation, disruptive technology for many energy-intensive chemical separations,” she says. “The organic cages are cheap to scale up compared to other organic materials, and most interestingly, they can be easily tuned for selective separations, unlike their inorganic zeolite counterparts.”