Locked MOFs are the key to high porosity

Locked MOFs are the key to high porosity

Metal organic frameworks (MOFs) are crystalline materials made from metal ions connected by organic linkers. They are ideal for hosting various molecules and have found uses from gas sensing to molecular separations to storage.
© 2021 KAUST; Anastasia Serin

A highly porous metal organic framework, assembled from molecular building blocks designed to lock together in a specific orientation, has been developed by researchers at KAUST.

Metal organic frameworks (MOFs) are crystalline materials made from metal ions connected by organic linkers. Their internal structure is like a repeating array of tiny identical cages, which are ideal for hosting various molecules. MOFs have found potential uses from gas sensing to molecular separations to storage, depending on the dimensions and structure of their pores.
One family of MOFs has been inspired by inorganic porous materials called zeolites. Zeolites are a special class of porous material with myriad applications, explains Norah Alsadun, a Ph.D. student in Mohamed Eddaoudi's lab, who led the research. “However, the ability to fine-tune the pore-aperture size and pore system of a given zeolite, based on a given topology, is extremely challenging,” she says. 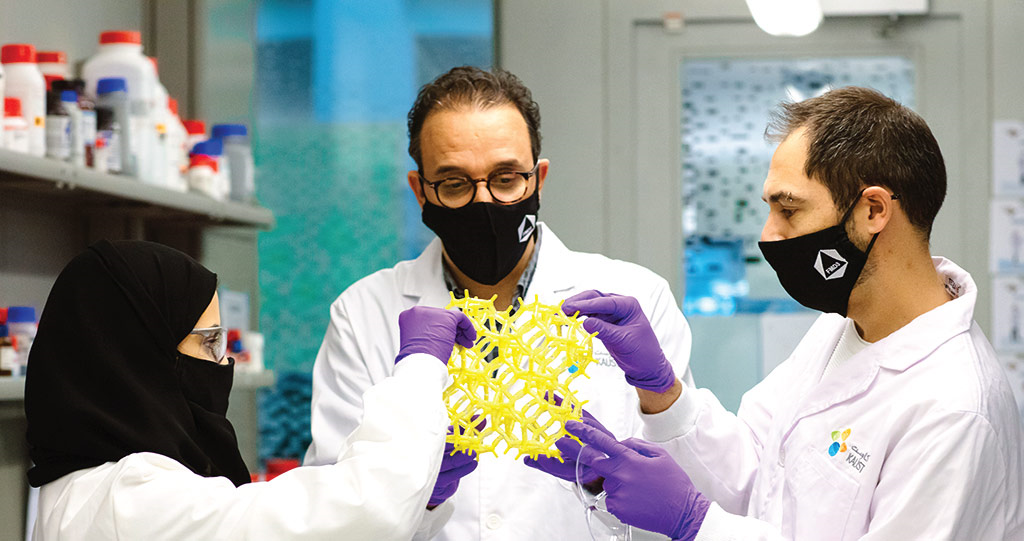 By mimicking the zeolite structure with a MOF, however, the pore structure can be readily adjusted by changing the metal and the organic linker. “Our group introduced the use of single-metal-based tetrahedral building units for zeolite-like MOF (ZMOF) construction,” Alsadun says. The basis of the tetrahedron-based ZMOF structure is a pair of triangular pyramids, attached tip-to-tip via a single bond.
The free rotation of the two triangles around the single bond typically leads to the formation of a diamond-like structure. However, the assembly of tetrahedral building units in MOF chemistry can lead to the simultaneous formation of multiple diamond networks, all penetrating each other, thus blocking the pores. “So, we developed a new concept for ZMOF assembly using polynuclear clusters as rigid, directional and locked-in building units,” Eddaoudi says. 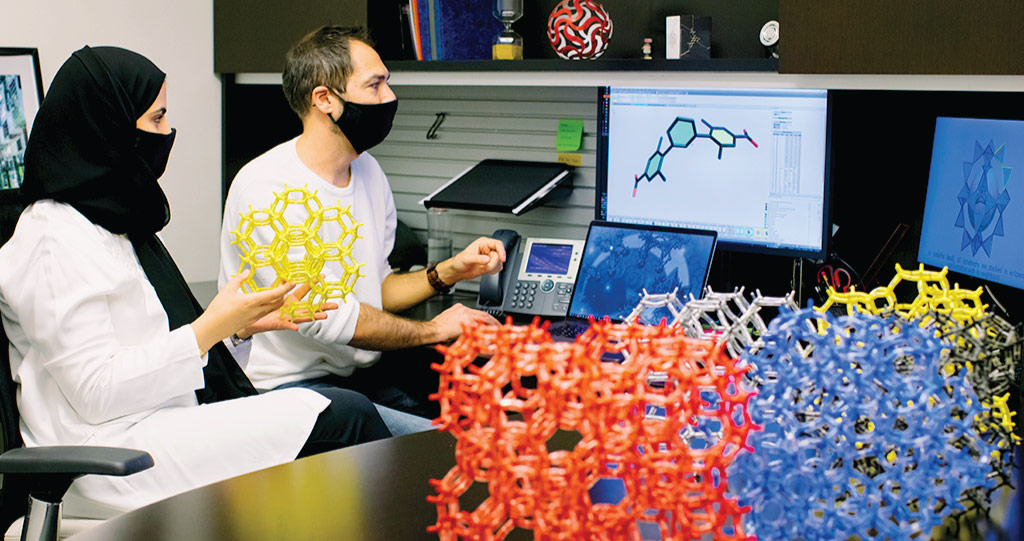 The team applied a new concept known as cantellation, showing that challenging structures can be accessed using their novel design.
© 2021 KAUST; Anastasia Serin
Rather than simple single-metal tetrahedra as the main building block, the team used expanded polynuclear clusters in which each edge and corner of the original tetrahedron is replaced by a new face — a geometric concept known as cantellation. As a result, the single bond linking the two tetrahedrons together in the original structure is replaced by three bonds, locking the structure into a specific orientation.
As the team had planned, the locked building blocks generated a ZMOF with a "sodalite", rather than a diamond-like, structure. “The sodalite topology has no room for interpenetration,” says Vincent Guillerm, a senior research scientist in the team. The resultant sod-ZMOF pores measured up to 43 angstroms in diameter, the largest yet reported for a ZMOF.
“Our work proves that these challenging structures can be accessed through our novel design,” Eddaoudi says. “Applying this strategy to construct other ZMOFs is now in progress.”