Bruno Pulido tests the efficiency of the team's synthetic membrane.

Discarded PET bottles could find a new life in the chemical industry.

In a world that seems to be drowning in plastic bottles, recycling this waste into useful materials would help to reduce its environmental impact. KAUST researchers have now invented a way to turn plastic bottles into porous membranes that could be used as molecular filters in the chemical industry.

Roughly 40 percent of the chemical industry’s energy used goes into separating and purifying chemicals in heat-intensive processes, such as distillation and crystallization. Using porous membranes to separate molecules from liquids could dramatically reduce that energy consumption. But most conventional membranes are not robust enough to withstand the sort of solvents used in industry, and alternative ceramic membranes tend to be very expensive.
The KAUST team turned instead to recycled poly(ethylene terephthalate) (PET). “PET is mechanically and chemically robust, making it useful for filtration and purification processes that require sterilization or cleaning with acids or bleach,” says Bruno Pulido, Ph.D. student. In 2016, global production of PET reached 50 million tonnes, accounting for about 9 percent of total plastic production. Roughly 30 percent of PET is used in the food industry, including single-use plastic bottles. PET is typically "down-cycled" into lower-value products, such as clothing fabrics, so converting it into higher-value filtration membranes could provide a strong economic incentive to improve recycling rates. 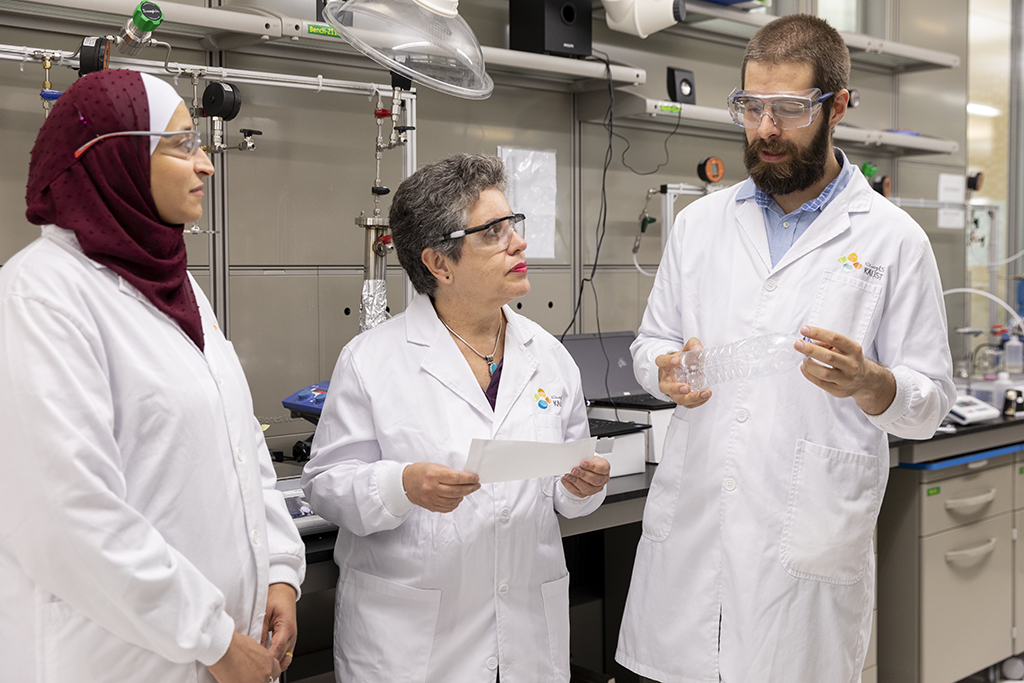 (l-r) Ola Habboud, Suzana Nunes and Bruno Pulido discuss the potential of their PET membrane for application to industry.

To create their membranes, the researches dissolved the PET and then used a different solvent to make the PET solid again, this time in the shape of a membrane instead of a bottle. 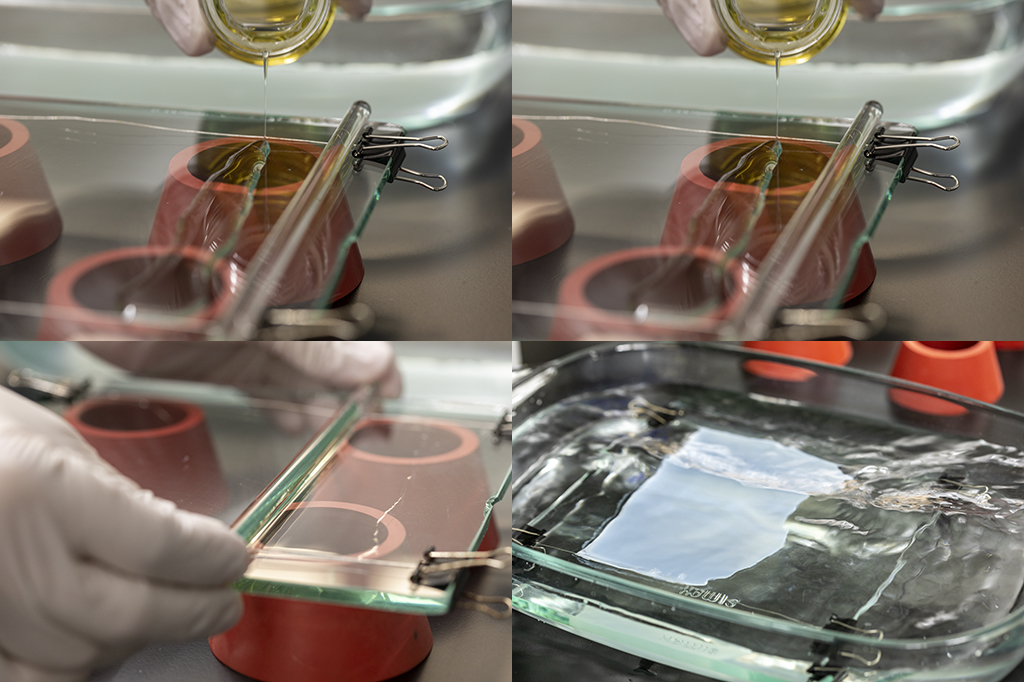 Fabrication of the polymeric synthetic membrane.

The team tested a wide range of different processing conditions and solvents and used an additive called poly(ethylene glycol) (PEG) to help form pores within the PET membranes. Changing the concentration and size of the PEG molecules helped to control the number and size of pores within the membrane, and thus fine-tune its filtration properties.
After optimizing this process, the team measured how easily liquid flowed through the membranes and how well they separate molecules of different sizes. The best membranes had pore sizes that ranged from 35 to 100 nanometers wide, with pores covering up to 10 percent of the membrane’s area; they also performed well at 100 degrees Celsius.

Electron microscope image of the pores of a PET bottle ( left) and the filtration membrane (right).

Pulido says that the membranes could be used as a support for thin layers of other filtration materials, such as those found in reverse osmosis membranes. “We’re also working on the development of PET hollow fibers, a type of membrane with additional advantages over flat membranes,” he adds.